The mission of the Grundy County-Jewett Norris Library is to provide for the educational, informational, recreational and cultural needs of the residents of Grundy County by offering a professionally selected and well-organized collection of print and non-print materials as well as other library services.

Jewett Norris, whose generosity was responsible for the library, was born June 11, 1809, on a New Hampshire farm. At the age of 22, he decided to become a pioneer in primitive North Missouri, arriving in what is now Grundy County in 1835. At that time, the area was a part of Carroll County, later becoming part of Livingston County upon its formation in 1837. Grundy County, which then included Mercer County, was established January 29, 1841.

Mr. Norris lived in a log cabin on what is now known as the McVay Farm north of Trenton. He was married to Sarah A. Peery in 1837, and they lived on the farm for 20 years.

Mr. Norris was a member of Grundy County’s first county court, as well as a merchant in early Trenton. In 1854, he was elected to a seat in the Missouri Senate and re-elected to that post in 1862. During the war, he was strongly Union in sympathy and became Captain of the Grundy County battalion of militia organized in 1862 and Lieutenant Colonel of the 13th Enrolled Militia.

When his health began to fail, Mr. Norris moved in 1870 to St. Paul, Minnesota, where he was fortunate to make lucrative investments. When he decided to bequeath the library to Trenton, he estimated that he had earned the sum of $50,000 during his residence in Grundy County and that he should return that amount to the County in his library gift. His letter of transmittal was dated January 22, 1890.

Mr. Norris’ offer was accepted immediately by the Trenton Board of Education, and the library building was constructed and equipped at a cost of $35,000 – leaving $15,000 for the endowment fund. Formal dedication occurred October 13, 1891, but Mr. Jewett Norris was not present, having died May 12 of the same year.

Beloved founder of the Grundy County Genealogical Society
Evelyn Sheets was a remarkable woman. Her desire to learn, and to share what she had learned, influenced many people. Without much formal education beyond high school, she taught college classes and wrote books. She researched and presented programs, resulting in the development of a vital interest among Grundy Countians in local history and genealogy.

But she wasn’t born a Grundy Countian herself. The daughter of Reverend Louise Robert King and Hazel (Cowan) King, Evelyn was born December 10, 1919, in Calwood, Missouri, and graduated from high school at Higginsville. She came to Grundy County in 1948 with her husband, John Sheets, who had been transferred to Trenton to manage the Mattingly Brothers Store.

She and John had two sons, Robert and John II, who were primary beneficiaries of Evelyn’s dynamic energy and of learning. In fact, both sons became college professors themselves. But they weren’t alone in being touched by Evelyn’s influence. She organized groups of senior citizens and taught them how to preserve local history. She taught them how to search for information and record their findings, resulting in the collection of over 2,000 family files in the Grundy County Jewett Norris Library. She had an early interest in oral history and was responsible for a collection of tapes recorded by persons with decades of memories of what it was like to live in north Missouri. She became interested in broader areas of research such as the orphan trains that brought neglected children from the eastern United States for relocation in the Middle West. She contacted and interviewed orphan train riders, helped organize a reunion for them and co-authored a book, We Are a Part of History: The Story of Orphan Trains.

Evelyn Sheets was a dedicated volunteer when the local historical society organized and when they opened the Grundy County Museum. She was also a founding member of the Grundy County Genealogical Society. Her contributions were recognized when the Board of Trustees of the Grundy County-Jewett Norris Library named the genealogy section of the library in her honor. Her work with the Missouri Folklore Society was commemorated by her inclusion in their booklet, A Centennial Tribute to Founders and Collectors, published 17 years after her untimely death in 1989.

Evelyn wrote a story called “Cooney’s Light” about her grandmother, who set a lantern at a high place each evening to guide anyone who might be lost while traveling in the mountainous area where she lived. Evelyn herself provided her own special kind of light to those who were desirous of learning and couldn’t find the way home 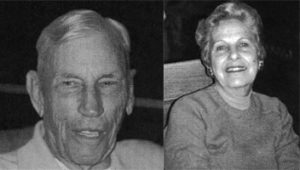 ROSE & BERT HEMLEY HOOVER
The citizens of Trenton and Grundy County pay tribute to Bert and Rose (Hemley) Hoover, whose commitment and foresight have made such a positive impact on the community and county where they spent most of their lives. They did this in countless ways sharing both time and money to improve educational, economic, and spiritual opportunities for others, and through their work to preserve the history of the area. Among their many gifts during their lifetime was the gift of a flatiron downtown building to provide a permanent home for the Grundy County Museum and Historical Society, and Rose’s gift of almost $500,000 to preserve and renovate the Grundy County Jewett Norris Library.

Hoover Theater
We will have more information about the Hoover Theatre here soon. In the meantime, please request rental information from our Assistant Director, Doris Baker